This day is called the International Day of Commemoration in Memory of the Victims of the Holocaust. It also commemorates when the Soviet troops liberated the Nazi concentration and death camp Auschwitz-Birkenau in Poland on January 27, 1945. 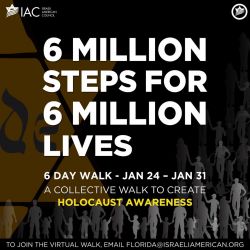 The David Posnack JCC is invited to join a community walk effort to reach 6,000,000 steps in 6 days to commemorate the 6,000,000 Jewish lives lost  and create Holocaust awareness. Download the free “Pacer”  app to your phone and all the steps you take between 1/24 and 1/31 will count towards accomplishing the goal of 6,000,000 steps.

Nation­al Jew­ish Book Award win­ner Ronald H. Balson’s new his­tor­i­cal nov­el, Eli’s Promise, takes read­ers back in time to 1939 Lublin, Poland. The sto­ry fol­lows the Rosens, a pros­per­ous Jew­ish fam­i­ly made up of Esther, a nurse, Eli who works with his father, run­ning a brick­yard and con­struc­tion busi­ness, and Iza­ak, their young son, as they weath­er the col­lapse of every­thing they know when the Nazis invade Poland. After the Nazis aryanize all Jew­ish busi­ness­es, Eli must turn his com­pa­ny over to Max­i­m­il­ian Poles­ki, an unscrupu­lous man who ped­dles favors to Jews in dire straits while col­lab­o­rat­ing with the Ger­mans. Poles­ki promis­es to keep Eli’s fam­i­ly safe, but will he? 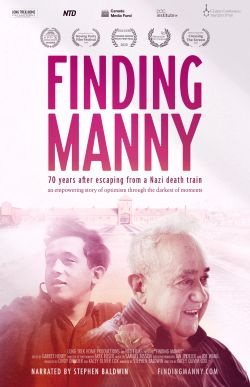 Link will be available through registration. Click here to register.

Manny Drukier narrowly escaped the war by jumping from a “death train” at age 16, finding refuge at a home for orphans and displaced children. 71 years later, Manny—who lives in Toronto—is tracked down by a German researcher who has been searching for the surviving children for the past decade. She invites Manny to return to the former orphanage to share his story with the next generation of school students. Manny must now revisit the places of his darkest memories, to reconcile the past and educate the future. 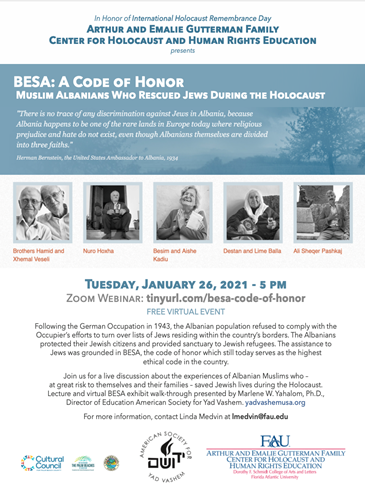 Michael Kagan is the son of Jack Kagan one of the 220 Jews who managed to escape via a 200 meter long tunnel from the Novogrudok work camp and make it to the forests of Belarus to join the Bielski Partisans. Michael co-produced the documentary film Tunnel of Hope (2014) about the escape that is thought to be one of the greatest escape of Jews in the Shoah. The Book of Curses (2019) is his second film as co-producer and is based on a recently discovered diary written from the same ghetto as an eye-witness account of the destruction of a thousand year-old Jewish community. Michael has also written a play about the escape (Dirt) and another about the diary (The Search for Benjamin Berkovich), is the author of the Holistic Haggadah (Urim 2004), a poet and artist, and is a high-tech entrepreneur living in Jerusalem.

Rabbi Dr. Leon Weissberg is a graduate of the City College of New York, holding several advanced degrees including a Doctorate, three Masters Degrees and Rabbinical ordination.  Dr. Weissberg has been a foremost leader in Holocaust education having taught courses at Lynn University and Broward College in Holocaust & Genocidal studies and was awarded Adjunct Teacher of the Year. His educational career has spanned a number of institutions providing them with incredible growth and development over four decades in South Florida. Among his accomplishments, he has been the Head of School of the Donna Klein Jewish Academy. Dr. Weissberg was instrumental in bringing significant adult education to South Florida by introducing the Florence Melton Adult Mini-school to Florida. Rabbi Dr. Weissberg has been the US Southern Region (PBC) Director & the Miami-Dade Director of the March of the Living having led over 2500 teens to Poland & Israel over 32 years initiating unique components to this exceptional teen experience of engaging non-Jewish teens and college students. As a child of survivors, a consultant to the Polish Dept. of Education on Holocaust studies, and a participant at Yad Vashem’s summer institute, he offers a plethora of insight and teachings.

The program was featured as part of the USHMM Facebook Live Series.
https://www.facebook.com/watch/live/?v=154264129713570&ref=watch_permalink

At age 27, in his first turn as a prosecutor, Benjamin Ferencz led what was then called “the biggest murder trial in history.” On behalf of the US government, he won guilty verdicts against 22 Nazi leaders of mass shooting operations that murdered over a million Jews. The Nuremberg Trials, which began 75 years ago this month, aimed to achieve a measure of justice for the unimaginable scale of Holocaust and war crimes. Ben, now 100, has devoted his life to pursuing peace, demanding justice for victims, and preventing genocide. Learn Ben’s inspiring story and why his motto is: “Never give up.” – USHMM