More Than I Love My Life 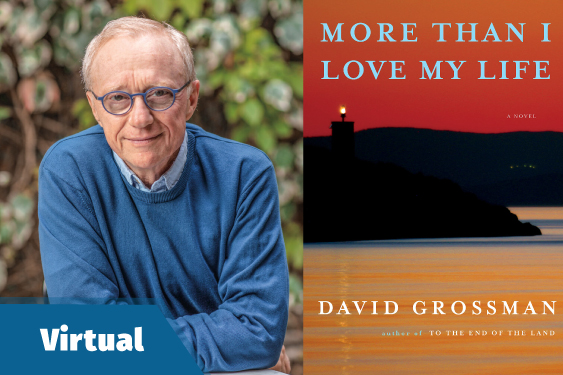 Book Fest In Your Living Room Presents
David Grossman, More Than I Love My Life: A Novel
In Conversation with Jessica Handler, Award-Winning Author

Zoom Author Talk and Q & A

Presented in partnership with the National Jcc Literary Consortium and A Cappella Books, Atlanta

More Than I Love My Life is the story of three strong women: Vera, age ninety; her daughter, Nina; and her granddaughter, Gili, who at thirty-nine is a filmmaker and a wary consumer of affection. A bitter secret divides each mother and daughter pair, though Gili—abandoned by Nina when she was just three—has always been close to her grandmother.

With Gili making the arrangements, they travel together to Goli Otok, a barren island off the coast of Croatia, where Vera was imprisoned and tortured for three years as a young wife after she refused to betray her husband and denounce him as an enemy of the people. This unlikely journey—filtered through the lens of Gili’s camera, as she seeks to make a film that might help explain her life—lays bare the intertwining of fear, love, and mercy, and the complex overlapping demands of romantic and parental passion.

More Than I Love My Life was inspired by the true story of one of David Grossman’s longtime confidantes, a woman who, in the early 1950s, was held on the notorious Goli Otok (“the Adriatic Alcatraz”). Grossman’s fearless examination of the human heart, this swift novel is a thrilling addition to the oeuvre of one of our greatest living novelists, whose revered moral voice continues to resonate around the world.

ABOUT THE AUTHOR
David Grossman was born in Jerusalem. He is the author of numerous works of fiction, nonfiction, and children’s literature. His writing has appeared in The New Yorker and has been translated into more than forty languages. He is the recipient of many prizes, including the French Chevalier de l’Ordre des Arts et des Lettres, the Buxtehuder Bulle in Germany, and the Man Booker International Prize – in addition to many others. He lives in Jerusalem.

ABOUT THE MODERATOR
Jessica Handler is the author of the novel The Magnetic Girl, winner of the 2020 Southern Book Prize, an Indie Next pick, Wall Street Journal Spring 2019 pick, Bitter Southerner Summer 2019 pick, and a SIBA Okra Pick. Her memoir, Invisible Sisters, was named one of the “Twenty Five Books All Georgians Should Read,” and her craft guide Braving the Fire: A Guide to Writing About Grief and Loss was praised by Vanity Fair magazine. Her writing has appeared on NPR, in Tin House, Drunken Boat, The Bitter Southerner, Brevity, Creative Nonfiction, Newsweek, The Washington Post, Electric Lit, and More Magazine. She teaches creative writing at Oglethorpe University in Atlanta, and lectures internationally on writing.